Skip to main content
This website will be retired soon, please use the new SecureAuth Docs site!

RADIUS is an open standard for performing user authentication on behalf of network access devices. It was originally developed in the 1990’s to enable a central source of access control for internet service providers providing dial-up access using terminal servers. Today, it is most commonly used to authenticate users connecting to a network via VPN servers or enterprise Wi-Fi access points.

RADIUS defines a lightweight datagram-based protocol for RADIUS clients (the network access devices such as VPN servers) to communicate with a RADIUS server. The server receives access requests from clients containing a user’s username and credentials, makes a decision to grant or reject access, and returns the result to the client. Many methods of authentication may be supported, from simple password checks to complex challenge-response algorithms requiring multiple steps.

The Acceptto RADIUS Agent provides a RADIUS server solution for authenticating your users in two steps:

The agent itself runs within a Docker container, providing a degree of isolation between it and the Linux host environment on which it is installed. Any virtualization platform that is capable of hosting Linux servers should be suitable, including on-premises solutions such as VMware ESXi and Microsoft Hyper-V, and cloud environments such as Amazon EC2 and Microsoft Azure.

Two or more instances are recommended to be provisioned to increase availability. The RADIUS Agent is a stateless service so there is no limitation for horizontal scaling, although the system can work with only one instance of the agent if high availability is not a hard requirement.

However, due to the nature of RADIUS, arranging for load balancing and/or failover can sometimes present unique challenges. See the Using multiple RADIUS Agents section, below, for details.

The Acceptto RADIUS Agent can be installed on any Linux system with a sufficiently recent version of Docker and Docker Compose installed. However, the following Linux distributions are supported by Acceptto:

The RADIUS Agent package includes an install-docker.sh script which may be used to install a suitable version of Docker on Red Hat and Ubuntu systems. However, if you choose to install Docker manually, know that we require Docker 19.3.0 or higher, and Docker Compose 1.26 or higher.

The minimum hardware requirements for deploying the RADIUS Agent are:

If the host is also being used for other services, the resources should be increased accordingly. In particular, if the same host is running both the Acceptto RADIUS Agent and the Acceptto LDAP Agent, 4 GB RAM is recommended.

The Acceptto RADIUS Agent communicates with the user directory using the LDAP protocol. Before deployment, a user account must be provisioned which allows read-only access to the directory.

The following information needs to be prepared before the installation: 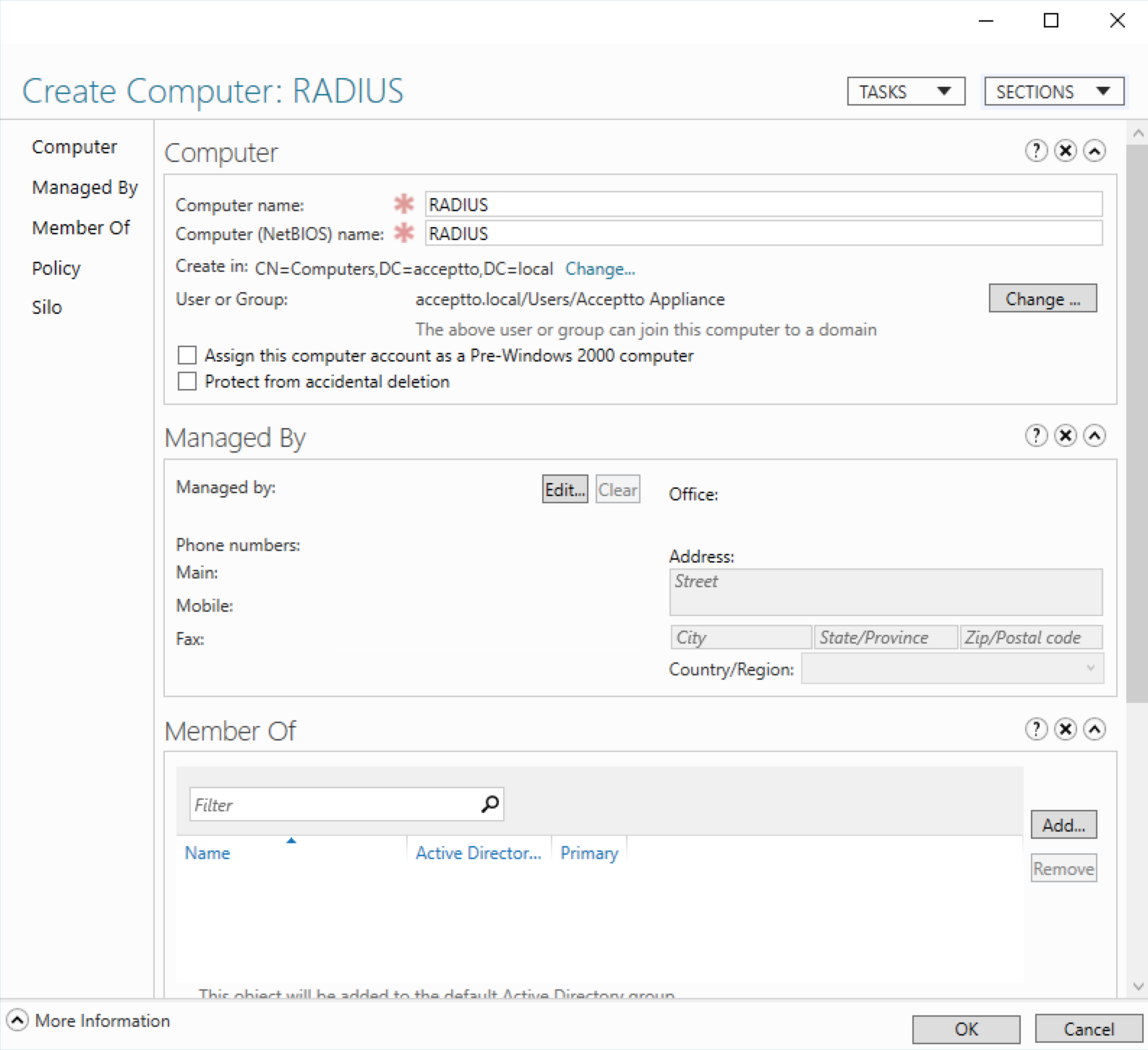 Please use this checklist to prepare for the installation:

Once all requirements are in place, the Acceptto team will provide the installation package and configuration file needed to complete the RADIUS Agent deployment.

The Acceptto RADIUS Agent is distributed as an archive named radius-agent-X.Y.Z.tar.xz (where X.Y.Z is the version of this release) containing the following assets:

To install the Acceptto RADIUS Agent, first upload the provided radius-agent-X.Y.Z.tar.xz archive to the server. (Where X.Y.Z, here and elsewhere in the installation instructions, is the version of this release.) On the server, find the archive and extract it using the following command:

Note that the extraction will create a radius-agent-X.Y.Z directory containing the installation assets. Change to this directory:

If this server does not have Docker and Docker Compose installed, they can be installed using the provided helper script:

(Note the use of sudo, as this step requires root access.)

If this is a new installation, Acceptto will provide a radius-agent-config.env configuration file template pre-configured with any credentials needed to pair your agent with eGuardian. You should edit this file using an editor of your choice (vi, vim, nano, or whatever editor may be available in your Linux system):

Finally, to install the agent, run the install.sh script from a user account with sufficient privileges to manage Docker:

Note that sudo is used in the above example to run the script as root, which should always have Docker privileges.

The installation process needs a destination directory where it can store agent assets such as the configuration file. It will suggest a default path, but you can provide an alternate location if desired.

Upgrading to a newer version of the RADIUS Agent works mostly the same as performing a fresh installation: extract the provided archive and run its install.sh script. Note the following minor differences:

The Acceptto RADIUS Agent is configured using environment variables supplied in the radius-agent-config.env file. The following configuration items are required for the agent to start:

If MS-CHAP authentication is needed, the following configuration items are required:

If EAP authentication is needed, the following configuration items are required:

The following configuration items are optional, and may be used to further guide the behavior of the agent:

Multiple RADIUS Agent instances may be provisioned to provide high availability of the RADIUS service. However, there are some important considerations when deploying agents in this manner:

The RADIUS service is flexible enough to support many different integration scenarios. The following examples are provided to show how the service may be used in a typical environment where an Active Directory server provides the primary source of information about users.

A network might have an existing VPN server which is provisioned to authenticate user login attempts using Active Directory:

To integrate Acceptto’s authentication services, a customer may install the RADIUS Agent and configure the VPN server to use it for authentication: 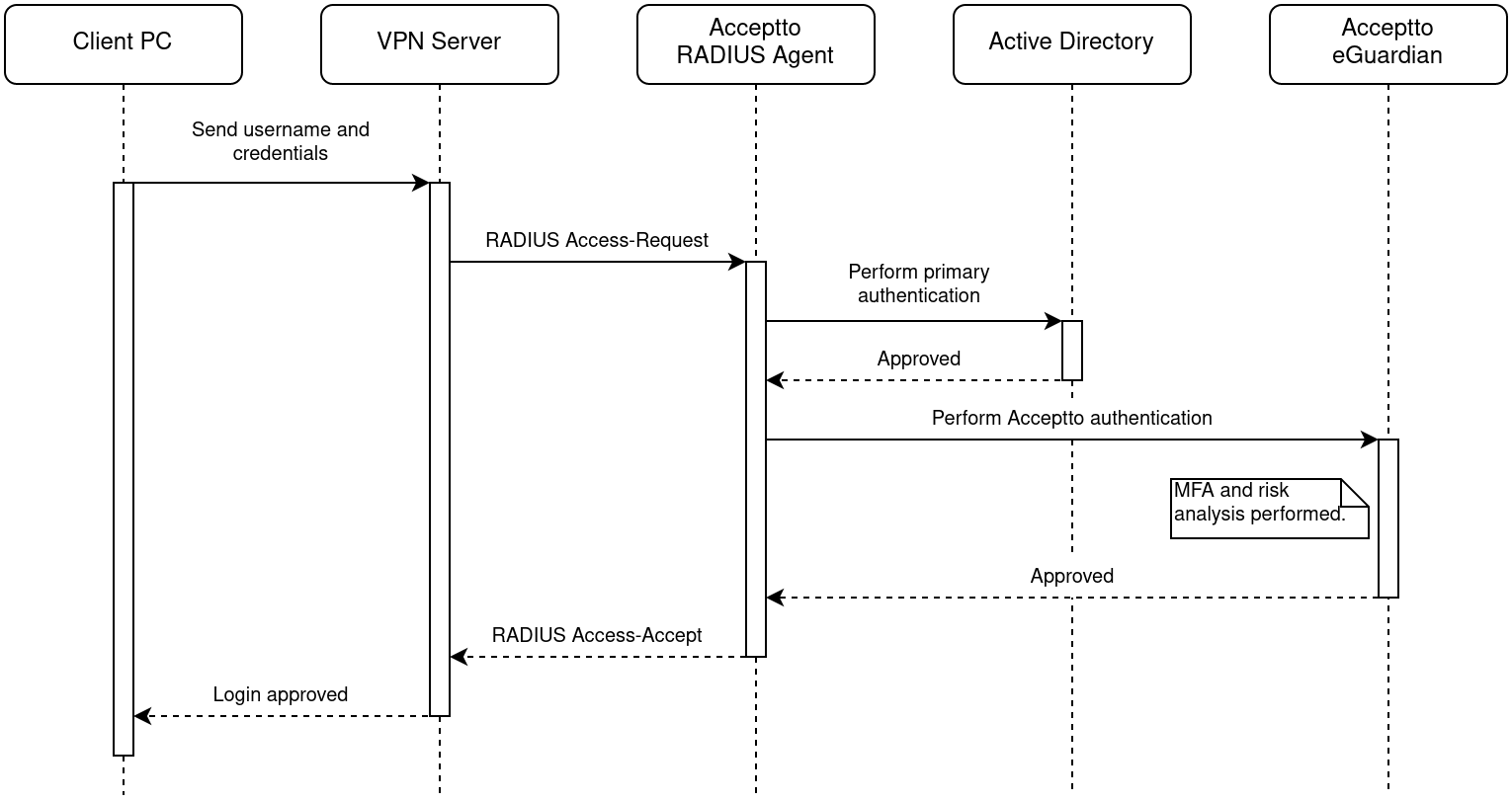 When the agent receives the access request, it will perform authentication with Active Directory as normal. If this is successful, the agent will take the additional step of authenticating the user with Acceptto's eGuardian cloud service, which will perform risk analysis and any multi-factor authentication required by the policy. For example, the user may be prompted to approve the access attempt on their mobile phone.

In the above diagram, the nature of the credential material is left deliberately vague -- it could be a password, or it could be any other sort of data required by the authentication method in use. For example, if MS-CHAP authentication is in use, extra steps will be present to accommodate the challenge and response, a specific Microsoft protocol will be used to authenticate with Active Directory, and the VPN server will receive MPPE keys if necessary for its encryption. In this scenario, the actual password never leaves the user’s PC: 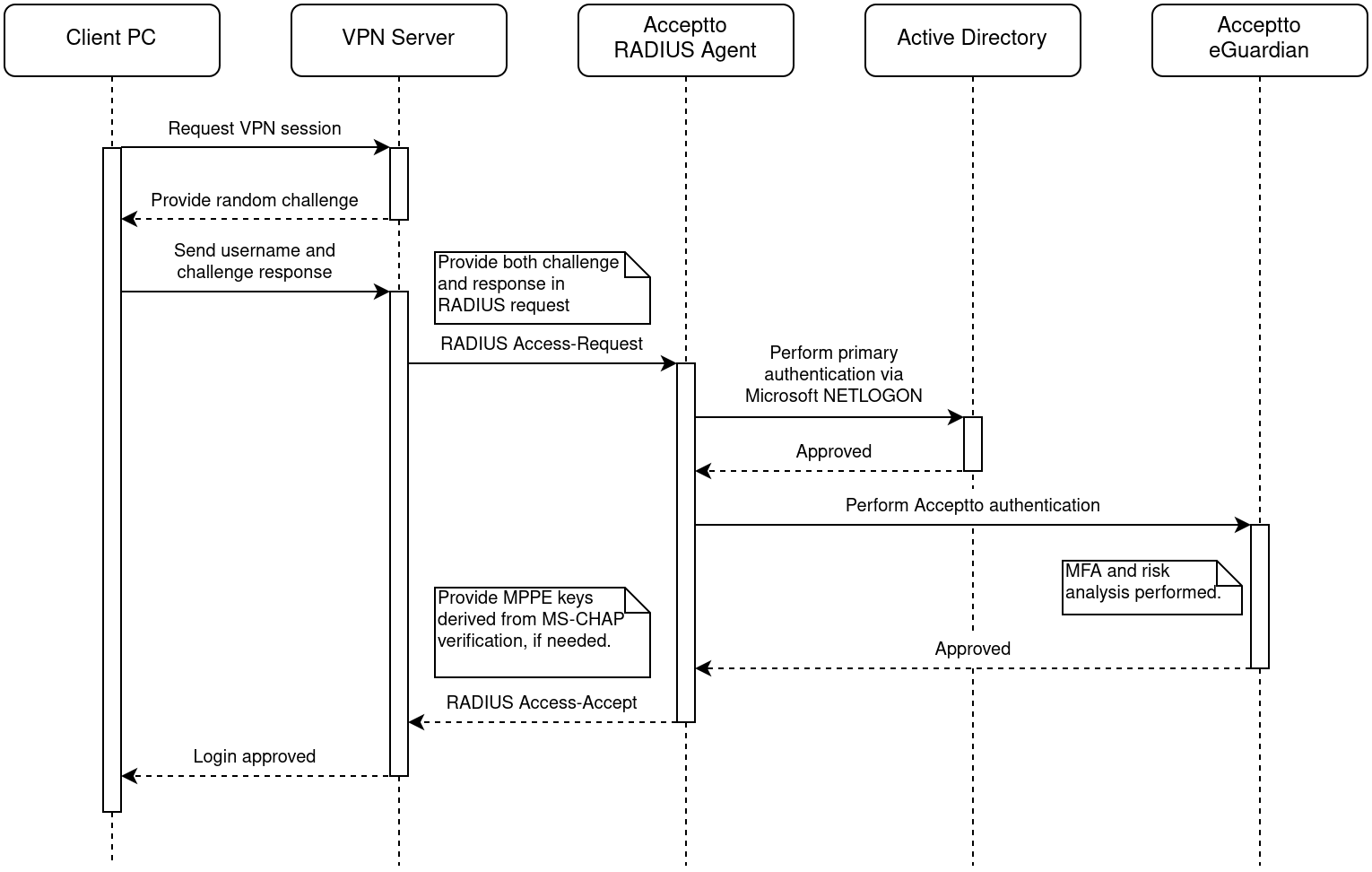